The Way Buildings Fall Down 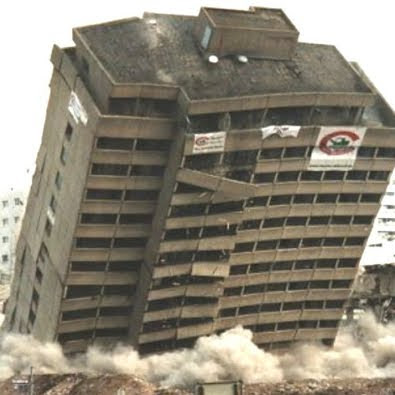 When damaged to one side only, as was Building 7 of the World Trade Center on September 11th, 2001.

They tip over, in other words.
Posted by StevenWarRan at 10:36 PM No comments: Links to this post 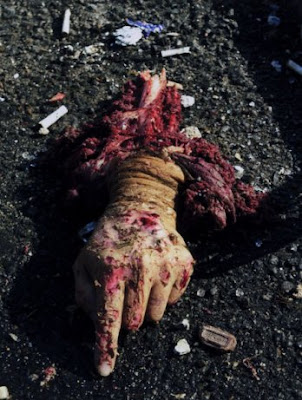 Posted by StevenWarRan at 8:59 PM No comments: Links to this post

This article speaks to the 9/11 conundrum in many ways. First, are what appears to be real families with real grief pursuing real knowledge of real events. Second, of course, is the subtext. But third, is the interesting information about, "a bomb hidden in a Toshiba cassette recorder wrapped in clothing in a suitcase." How was that determined? Was it part of a confession? Was it forensics evidence? Did the cushioning of cloth defeat bomb detection? Was the bomb fragile and at risk from jostling, like a precious vase wrapped in worn nylons? I am so fucking tired of this shit. When, oh when, will the world acknowledge the absurdity of these stories told by the world-wide "intelligence" communities? But here at least, I hear the real sound of grieving, compared to the mock sound of 9/11 death.

Facing American demands that he serve his full term in prison, the only person jailed in the 1988 bombing of Pan Am Flight 103 is seeking to abandon his second appeal against his conviction, his lawyers said Friday, a potential prelude to his early release.

Abdel Basset Ali al-Megrahi, a 57-year-old Libyan national and former intelligence agent, is serving a 27-year term imposed in 2001 for his role in the bombing over the Scottish town of Lockerbie that claimed the lives of 270 people, the majority of them Americans.

The Scottish authorities acknowledged Thursday that they were considering requests for his early release on compassionate grounds because he has terminal prostate cancer. But a furious debate has again erupted between the survivors of the dead, with many Americans demanding that he should not be allowed to return to Libya, while some Britons say he is innocent and should be freed.

The complexities of the case took on diplomatic overtones on Thursday when the U. S. State Department said Washington had told the British and other authorities that Mr. Megrahi “should spend the rest of his time in jail.”

The Scottish authorities indicated Thursday that they would decide next week whether to free him. The Scottish High Court is to rule on his request next Tuesday, the lawyers said. If he were freed it would allow him to return to Libya before the start of the Muslim holy month of Ramadan.

The Libyan government has applied for his release from prison in Scotland to serve out his term in Libya under an agreement with Britain on transferring prisoners. But that treaty can only be invoked in the absence of any outstanding legal matters. The Scottish authorities may also release prisoners on compassionate grounds even if legal issues are still unresolved.

Mr. Megrahi, who has always protested his innocence, filed a first appeal against his conviction soon after he was jailed, but that was rejected in 2002. In 2007, a judicial review challenged some of the prosecution evidence at his trial, enabling him to launch a second appeal.

Some British survivors said the appeal should continue in order to re-examine the events that led to the explosion aboard Pan Am Boeing 747 at 31,000 feet just after it crossed the Solway Firth in Scotland.

“At the moment there is no other process or procedure ongoing to tell us how the bombing was carried out, why it was done, the motivation for it and who ordered it,” said Pamela Dix, whose brother, Peter Dix, died in the bombing, according to Britain’s Press Association news agency.

At a trial starting in May 2000, Mr. Megrahi and another defendant were charged with the murder of the 270 victims in a conspiracy to blow up Flight Pan Am 103 using a bomb hidden in a Toshiba cassette recorder wrapped in clothing in a suitcase. The suitcase was smuggled onto an airplane in Malta and tagged so that it would go through Frankfurt and London on to the Pan Am airplane.

After a trial under Scottish law at a former NATO military base called Camp Zeist in the Netherlands, Mr. Megrahi was convicted in January 2001, but his fellow defendant, Al Amin Khalifa Fhimah, was acquitted.

Posted by StevenWarRan at 9:00 AM No comments: Links to this post

IT is one of the most stirring accounts of heroism to emerge from 9/11: a fighter pilot from Andrews Air Force Base near Washington returns from a training mission, finds out that a plane, United Airlines Flight 93, has been hijacked and is heading for Washington, then takes off without refueling and low on ammunition in pursuit.

According to “Touching History,” Lynn Spencer’s recent account of what “unfolded over the skies” on 9/11, the pilot, Maj. Billy Hutchison, took off and flew over the Pentagon, asking the civilian air traffic controllers to give him a vector from his current location along with a distance to the target.

“This method works, and Hutchison quickly spots the aircraft on his radar,” writes Ms. Spencer. “He quickly comes up with a plan: he will try first to take the plane down with practice rounds fired into one of the engines, and then across the cockpit. ... If that does not sufficiently disable the aircraft, then he will use his own plane as a missile. He thinks again of his son and prays to God that his mission won’t end that way.”

It is hard to imagine a more thrilling, inspiring — and detailed — tale of fighter-jock heroism. There is only one problem with it: it isn’t true. It is about as close to truth as the myth of the Trojan Horse or the dime-store novels about Billy the Kid.

As we pointed out in the 9/11 commission report, the radar records of the day indicate that Major Hutchison did not take off until more than a half-hour after United 93 had crashed near Shanksville, Pa., and a good 20 minutes after the wreckage had been located. He could not have seen United 93 on his scope, and could not have intercepted it. Like thousands of others that day, he did his duty. He was brave. But his tale isn’t true.

The Billy Hutchison story is an example of a phenomenon that the 9/11 commission staff encountered frequently: heroic embellishment. If something good happened that morning, an amazing number of people took credit. Take, for instance, the decision to land all civilian aircraft. As the report notes: “This was an unprecedented order. The air traffic control system handled it with great skill, as about 4,500 ... aircraft soon landed without incident.” But whose idea was it?

In the aftermath of 9/11, Transportation Secretary Norman Mineta claimed that he ordered all civilian aircraft to land: “I said ... ‘get the damn planes down,’ ” he told ABC News. Richard Clarke, the National Security Council’s antiterrorism director, has written it was he who prompted the order, by saying to Jane Garvey, the Federal Aviation Administration’s director, “O.K., Jane, how long will it take to get all aircraft now aloft onto the ground somewhere?”

In fact, the commission established that the order was issued by Ben Sliney, the aviation administration’s national operations manager, on his own initiative, after hearing that the Pentagon had been hit.

Most of the exaggerated claims from 9/11 are harmless, springing as they do from some combination of the unreliability of witness recollection, the psychological need for consolation after a defeat, and the human love of a good story. They are, more than anything else, a commentary on human nature.

Others, however, are not harmless, not innocent, and cannot go unchallenged. In fact, they fuel distrust of the government, give rise to conspiracy theories and threaten to set back America’s efforts to avoid future 9/11’s.

Take, for instance, the tale of Major Hutchison, which is part of a larger and totally discredited story. After 9/11, military and government officials undertook an aggressive public relations effort. In testimony before Congress and the 9/11 commission, in numerous interviews, and in an official Air Force history, these officials told the country that by the time United 93 turned toward Washington, President Bush had issued the shoot-down authorization, Vice President Dick Cheney had passed it on, fighters were standing by over Washington and, as the military’s commander at the Northeast Air Defense Sector headquarters in Rome, N.Y., told ABC News of the authorization to shoot down the planes: “We of course passed it on to the pilots. United Airlines Flight 93 will not be allowed to reach Washington.”

Yet the commission established that none of this happened. Once we subpoenaed the relevant tapes and other records, the story fell apart. Contrary to the testimony of retired Gen. Larry Arnold, who on 9/11 was the commander of continental defense for the North American Aerospace Defense Command, fighters were not scrambled that morning to meet the threat posed by United 93. In fact, the fighters were sent up in response to an unrelated and mistaken report that General Arnold and others had not disclosed to the commission. Flight 93 hadn’t even been hijacked when the planes were ordered scrambled, and General Arnold’s command found out the plane was hijacked only after it had crashed. The authorization to shoot it down came after it had crashed, and was never passed on to the pilots.

No one is telling that tale anymore, but the damage was done. Because the story couldn’t withstand scrutiny, the public was left free to believe anything, and to doubt everything. Many still believe that a cruise missile hit the Pentagon; that 9/11 was an “inside job” by American and Israeli intelligence; that the military actually did shoot down United 93.

Worse still, by overstating the effectiveness of national command and control by the time United 93 was heading for Washington, the government obscured the central reality of that morning: that the Washington establishment talked mainly to itself, disconnected from the reality on the ground and in the air. Because bureaucrats obscured that disconnect, they didn’t fix it, in terms of national security or any other complicated federal emergency response. Thus the whole world got to see a very similar reaction in 2005, when Hurricane Katrina hit, and residents of New Orleans struggled to survive on their rooftops while officials in Washington issued reassuring statements.

The afterword to “Touching History” was written by General Arnold, despite his having been forced to retract his testimony to the 9/11 commission. (“I was wrong,” he told the panel at its final hearing. “I was wrong.”) He praises the book’s “corrections to the record” because they recognize the heroism of people like Major Hutchison and expose the “political agenda” of the commission.

Yes, the commission staff looking into these events did have an agenda. Our team included a retired military officer who was badly burned in the Pentagon attack, and a former federal prosecutor whose wife lost both her brothers in the World Trade Center. We believed that telling misleading stories about what happened undermines the public’s confidence in government, spawns conspiracy theories and compromises efforts to prepare for future events. Truth, not wishful thinking, is the most enduring memorial we can leave.

There were heroes on 9/11, people whose split-second decision-making saved lives. All too frequently, as in the case of many civilians and first responders in New York and the passengers and crew aboard United 93, those heroic deeds cost them their lives.

America lost that day. At critical moments, our nation was undefended — something the passengers on United 93 realized when they decided to work together to bring the plane down. We should not allow such real heroism of that day to be diminished, or the grim reality of that day to be obscured, by the self-serving agendas of would-be heroes.

John Farmer, John Azzarello and Miles Kara were staff members of the 9/11 commission.
Posted by StevenWarRan at 8:07 AM No comments: Links to this post